For the grammatically correct, doubling down makes no sense, but for blackjack players doubling down is quite a favourable option.

If you are wanting to use doubling down to your advantage it is important to locate a title with this rule in place. To help you out we have mentioned a few titles which permit players to double down below which you can play online. But for now read on to find out when the best times to double are.

What does it mean to double down? 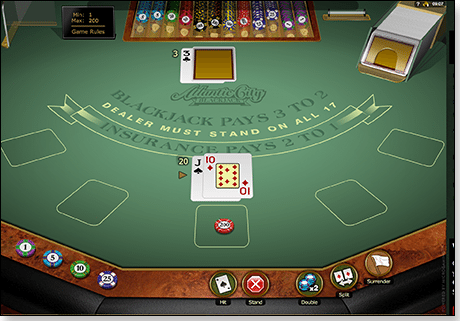 with one facing up and one concealed. If you choose to double down you will be able to place another bet equivalent of up to your initial bet in exchange for only being allowed to receive one more card.

It is like hitting, but you are placing more money on the bet and your bet concludes after you choose to double down. By using the basic blackjack strategy chart which has been created via statistics you are able to figure out when exactly you should perform a certain action. The basic strategy chart won’t ensure a certain win but it will help determining when it is the best time, in terms of statistics, to double down.

Best cards to double down on in blackjack

We have seen it all before, crazy folk doubling down on less than strong hands, which often ends in tears for the punter. When should you double down? Basic strategy suggests the best time to double down is when your first two cards amount to a hard nine, 10, or 11.

Hard nine – When your hand amounts to a hard nine it is recommended to compare the dealer’s revealed card. If they are holding a bust card of three, four, five, or a six, then is recommended to double down, while a two sees the chart advising players to hit instead. This is based on the common variations which are played with four to eight decks.

What is soft doubling with the rule of nine?

On blackjack strategy charts there is rarely an indication as what to do when you you have a soft hand featuring an Ace and a second low card. This is where the ‘Rule of Nine’ enters to help where the basic strategy chart doesn’t. Players who have a soft hand with an Ace and a card which values anything from two to seven should double down, however this is dependant on the dealer’s up card.

For those with an eight or above, players should not double down. In order to determine whether or not players should double down with an Ace and a card from two to seven, we need to add the amount of the dealer’s up card to the amount of your card that isn’t the Ace. If the sum of the two cards is nine or greater, it is advised to double down, while if it is less than nine it is recommended players hit instead. However there are scenarios when this rule will not work including when the dealer is showing a two, a seven or higher.

When to never double down

It is important to know when not to double down as the idea of doubling your winnings can seem quite enticing and take away common sense. By learning when you should never double down you are ensuring you won’t lose more than you were initially prepared to lose.

Never double down on;

Can I double down after I split?

Some titles of blackjack offer the option to double down even after splitting and the basic strategy chart features when exactly to do so. It is recommended to split after doubling down in these cases;

What online blackjack titles allow the double down rule?

Atlantic City Blackjack – Follows standard game play of traditional blackjack but a hand can be split up to three times and double down is permitted after players split a pair.

Vegas Downtown Blackjack – Similar game play to European Blackjack but players are allowed to split up to three times, but only once with Aces. Doubling down after splitting is accepted.

Vegas Strip Blackjack – Similar game play to Atlantic City Blackjack but is played with four decks instead of the eight and doubling down is only accepted on two cards, with a double down also accepted after splitting.